Ever wondered what were the emotions that drove the freedom fighters of our country to sacrifice their lives just so their coming generations could live and breathe in a free country, as a united nation? That very patriotic fervour is best captured by legendary Indian poets, whose words inspired the young guns of India to revolt and fight for a better tomorrow. 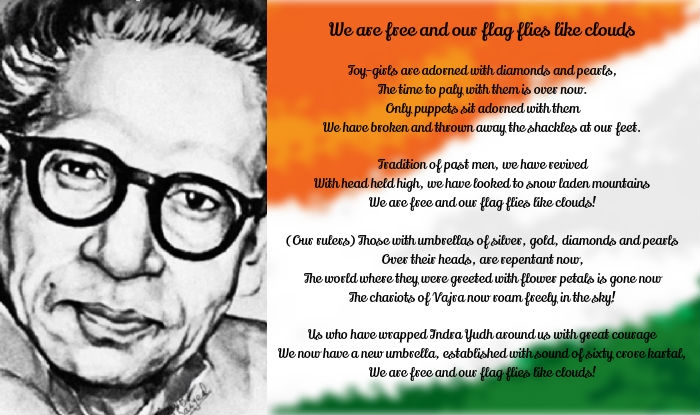 Born on on 27 Nov 1907, Bachchan has experienced life in an India that was in shackles as well as in India that was free. Bachchan’s poems which were all originally written in Hindi, have been translated into several languages. He is considered as a great poet of the Chhayawad literary movement (romanticism). This poem ‘Azadi ka Geet‘ beautifully summarizes the emotions of an India, that had won its freedom and was looking forward to a bright future. Chaturvedi, born on April 4, 1889 , was again a part of the Neo-romanticism period of Hindi literature. Chaturvedi, who was also known as Panditji, was not just a poet, but also an essayist, a writer and a journalist. He also had an active role in the freedom struggle. This memorable poem brilliantly reflects the sentiments of the freedom fighters of the time, with a flower as the mouthpiece and is considered one of the finest works of patriotic poetry. Who doesn’t remember the indelible words of the eternal Hindi song ‘Vijayi vishva tiranga pyaraa…Jhanda ooncha rahe humaara..’ Gupta, who was born on September 9, 1896 had immortalised the tricolour as the symbol of the freedom struggle long before it became the national flag of the world’s biggest democracy. The song continues to instill the spirit of patriotism and an undying love for our beloved flag in the hearts of Indians, just as it did in the hearts of the freedom fighters who were inspired to free India from the clutches of the British. 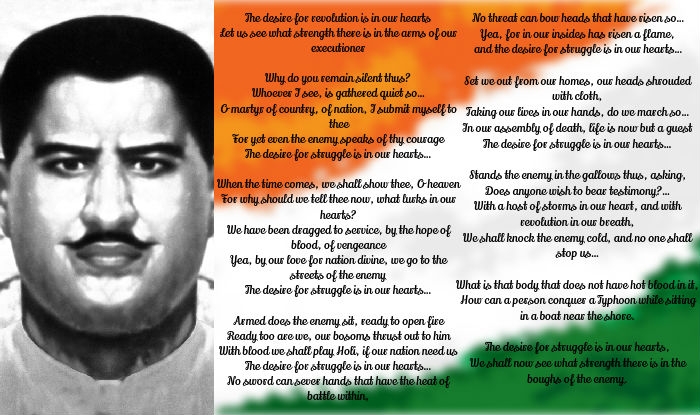 This Urdu ghazal written by the Arya Samaji Ram Prasad Bismil, who was born on 11th June 1897, is perhaps one of the most inspiring works of poetry ever written about freedom. The ghazal enshrines the  drive and the spirit of the freedom fighters who fought and sacrificed their lives to free India from the slavery of the British. The ghazal assumes greater significance in the light of the fact that Bismil himself was executed by the Britishers at the age of 30. But little did the British know that Bismil had left his spirit behind in these words, which would go on to inspire many youngsters after him, the foremost of which were Shaheed Bhagat Singh and his comrades.

5. Where the mind is without fear by Rabindra Nath Tagore Fondly known as Gurudev, Rabindra Nath Tagore, is unarguably one of the foremost poets, writers, painters and intellectuals of India. He single handedly reshaped Bengali literature and music as well as Indian art with modernism in the late 19th and 20th century. Tagore’s influence transcends boundaries of not just states in India but of countries across the world. This poem has been taken from his best work ‘Gitanjali’ for which he also won the Nobel Prize for Literature in 1913. The brilliantly sensitive poem is a proof of not just Tagore’s extraordinary prowess as a poet but also as a visionary.